Why America’s Founding Secretly Influences You

You don’t have to be an American to say you’re an American. That was the whole idea of the American Experiment – it was meant for all nations, not just those uppity Tea Partiers who frolicked in Boston Harbor a few centuries back. 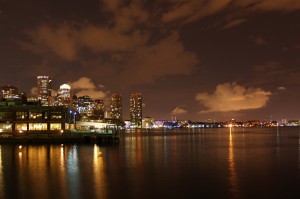 But this experiment didn’t start with the American Revolution, Declaration of Independence or even the United States Constitution. It began with a collection of oppressed runaways and an accidental metaphor that endures to this day.

After reading a perhaps too rosy account of the Plymouth Colony by the Pilgrims Edward Winslow and William Bradford, excitement grew in England to establish more companies to found additional colonies. Under the guise of a business venture, a group of persecuted Puritans quietly sought and were granted approval for the establishment of the Massachusetts Bay Company. In 1628, the Company founded the new Colony (into which Plymouth Colony would eventually merge).

A year later, after King Charles I began to more intensely suppress Puritans, an affluent Puritan lawyer, John Winthrop, emigrated to Massachusetts Bay Colony. For twelve out of the next twenty years, until his death in 1640, Winthrop served as Governor of the Colony. Ironically, he ruled with the same authoritarian fervor as Charles I, often discriminating against others based solely on religious grounds (just ask Roger Williams and Anne Hutchinson, two of the people he expelled from the Colony). So tarnished was his reputation in the nineteenth century that Winthrop even made an unflattering (he dies) cameo appearance in Nathaniel Hawthorne’s Scarlett Letter.

But this isn’t why we remember Winthrop. You can read Winthrop’s lasting legacy in A Modell of Christian Charity, written in 1630 while on board the Arbella, sailing on the Atlantic Ocean en route to the Colony. Winthrop delivered this as a sermon to the future colonists traveling with him. What he gave us, including you, was a treatise on the importance of always striving for the ideal. That he never achieved his sermon’s ideal in his own life makes the metaphor all the more poignant (and appropriate).

First, A Modell of Christian Charity foremost represents a to-do list for all those aspiring to live the ideal life – at least according to Winthrop. Think about that for a moment. What’s the first thing you do when you create a new team, whether it is a work-sponsored softball team, a new business entity, or a homeowners’ association, to name a few. Why, you’d come up with a set of ground rules. It’s really a set of personal beliefs everyone agrees to. It’s what binds you all together.

In essence, Winthrop’s primary objective with this sermon meant to build a sense of unity among the colonists. It didn’t matter where they came from, why they came from there, or how they paid (or didn’t) for their ticket on board the Arbella. (Actually, under Winthrop’s rule it did, and that represents his great ironic failure.) In theory, at least, if the colonists were a high school glee club, Winthrop would have had them singing We’re All In This Together. Today we would call these “team rules,” “corporate by-laws,” or “association guidelines.” In the Roman Catholic religion, they’ve called it a “Creed” for something like twenty centuries or so.

So, the first thing Winthrop gives us is a standard by which to operate, a sense of the need to come up with the rules of the game before the first player even steps onto the field. Remember, he read this sermon to the colonists as they were en route to the Colony – before they had seen what Massachusetts looked like.

In order to achieve your Lifetime Dream, you’ll have to do the same thing, either as an individual, or, if you’d like, as a couple or as a family.

But that’s not all Winthrop’s sermon bestowed upon the generations. In fact, few people even remember his structure because the much more famous – yet similar in concept – Mayflower Compact came first. Here’s what has allowed Winthrop’s words to stand the test of time, despite his controversial record as Governor: In the penultimate paragraph, he says, “For we must consider that we shall be as a city upon a hill. The eyes of all people are upon us.”

Winthrop alludes to Jesus’ Sermon on the Mount, where, according to Matthew (5:14), Christ says, “You are the light of the world. A city that is set on a hill cannot be hidden.” Although Winthrop at the time intended this to inspire his colonists to create a community based on a religious ideal, both Ben Franklin and John Adams, among others, would use this same language in a more secular form to inspire a new nation during the debate at the Constitutional Convention in 1787. More recently, John F. Kennedy and, in particular, Ronald Reagan would reference Winthrop’s (now) “shining” city upon a hill.

In the end, it’s important for you to appreciate, whether you know it or not, that this sense of the ideal, just like the need for a creed, has been inculcated deep within you. It goes well beyond the reasoning faculties of your brain and reaches into the very passions of your heart. It’s funny but true. The constant hammering of a national ethic, in this case by the legend of American Exceptionalism and the American Ideal, can silently influence us as we live our everyday lives.

Here’s why. A set of rules creates tangible boundaries and gives you the confidence to plan strategies without fear of retribution. Similarly, a well-articulated ideal can motivate and encourage you, especially when you slog through those inevitable tough times.

An ideal, it appears at least from Winthrop’s lack of practical success, doesn’t have to be rooted in any reality. It just has to be believable. That’s why, at the end of John Ford’s The Man Who Shot Liberty Valance, upon hearing the truth of who really shot Liberty Valence, the newspaper editor tells the young reporter, “When the legend becomes fact, print the legend.”

As you’ll no doubt discover (assuming you haven’t already), if you want to keep moving forward when it seems like everything in the world is against you, sometimes it’s more important just to have something to believe in than to know all the facts.

But we’re not ready to leave our American history yet. If you’ve been following along with these chapters, you’re about to find out something about American history they never taught you in school – and something that begins to tie together everything we’ve been talking about.