Your Date with Destiny

An inconspicuous spot stands apart in a dimly lit corner of a musty, but comfortable, restaurant. The usual red and white checkered cloth covers this tiny table for two. The only light in the darkly paneled corner comes from a lone candle atop the table’s center. A worn wooden chair occupies a position on each side. The slightly overdressed couple sits casually. Their rigidly relaxed bodies betray the dull seriousness of their conversation. 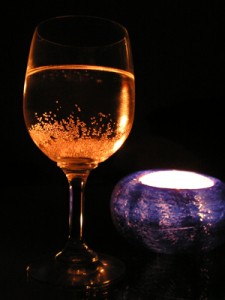 Ever the curious sort, you’ve always wanted to meet fate. She’s now poised across from you, having accepted your invitation. Things aren’t going well.

“Tell me,” she says with forced interest, “what is it you really want to do?”

You pause, your eyes looking through her and at the mirage forming in your head. The question causes something to click. You decide to truly answer it. The stock response, though less risky, would result in merely the expected – and unexciting. Still looking through her, your eyes squint, as if to make out an object barely on the edge of your vision.

“Yes,” she returns quickly and with just a hint of anxious frustration. Though she has nowhere else to go, she glances at her watch.

“You might not believe what I’m going to say,” you offer. “I mean, I guess, I know what I want to do, but that’s about all I know.” Your delay allows you to reach further into your soul to find the image of your destination.

She fidgets. “Well, just say what comes to your mind – or forget it if it’s too personal.”

Her retreat startles you. You have made the decision to share your ideal with her. The potential withdrawal of her query would leave just another unexplored path in your conscience. You refuse to let that happen.

“No! No!” You react quickly, but pleasantly. “It’s not like it’s too personal at all. It’s just that I guess I’m not that good of a thinker and I might have to say it a few times before it comes out the way I want it to.”

“My goodness, you’re not going to tell me you want to be King of The World, are you?” Her hasty assumption and cynical demeanor does not surprise you. It also leaves you unimpressed.

You elect to blurt the explanation despite your unforged thoughts. Clearly, you consider this portion of the conversation more adventurous and fulfilling than she does.

“I guess someday I’d like to go over the mountain.” You look at her now, closely measuring her every non-verbal response.

She pauses, expecting more. As it becomes clear you will offer nothing further, she poses her interpretation. “Which mountain do you want to climb?”

“You want to go over a mountain? What for?” She senses you want to be difficult and this irritates her.

“Not just any mountain,” you explain, “the mountain. I don’t know which mountain, but I know it’s out there somewhere.”

“You and the rest of humanity,” she adds dryly. “You’ve been reading too many stupid literary novels.”

“It beats insipid romance novels,” you shoot back. You immediately return the discussion to the original topic. Your eyes turn sincere and soothing. “No, I’m not talking about philosophy or cosmic nirvana. It’s just I feel there’s a mountain out there with my name on it. It’s unchartered terrain and nobody knows what’s beyond it.”

Your demeanor calms her. She shifts toward you, hinting a slightly greater interest. She also suspects you will soon reveal your egocentricity. She gives you the rope. “So, what makes you think you’re so special, or is this just one of those pompous human traits?”

“Special!?” Your eyes flare. “You misunderstand what I’m saying. The mountain exists for me for the very reason that I am not special.”

She takes the bait. “Not special? What do you mean by that? You’ve got to have some differences to have a whole mountain with your name on it.”

“Ah, differences,” you echo with knowing emphasis. “The differences are the key. You’re right. The mountain has my name on it because I’ve got some things about me that make me different from other people.”

“So, what are these differences?” Intrigued, she knows your confession to possessing a difference represents just another way of admitting conceit.

“Well, for one thing, I have no debts or dependents. I am free to leave without causing anyone harm. I don’t think my absence would upset anyone too terribly.” You hesitate, hoping ever so slightly Fate would dispute this point. She shows no sign, so you continue.

“In fact, one of these days I’d really like to just up and leave. I’d like to be sitting at my desk at work, get hit by some inspiration and leave. I wouldn’t take my coat or my briefcase. I wouldn’t turn off my computer. I wouldn’t say goodbye to anyone or leave a forwarding number with the receptionist. I’d just leave.”

“Oh,” she interrupts, suspecting a flaw in your reasoning, “so you’re saying you want to be irresponsible.”

“Absolutely not! First off, it would be arrogant for me to assume I’m irreplaceable. Secondly, I fully expect to return to continue whatever it was I left. Lastly, the whole idea of going over the mountain entails doing something far greater than anything I could ever do.”

“No, no, no. People may or may not choose to venture over the mountain. My journey exists for me. Others may do as they please. They control their paths, not me. They may even discover they have their own mountain.”

Fate leaned back, deep in contemplative thought. “This job just might be a bit harder than I thought.”

Each of us has our own personal peak beckoning us. What mountain do you seek to climb?

« Banzai! » What Do You Want on Your Tombstone?