“History is a sour 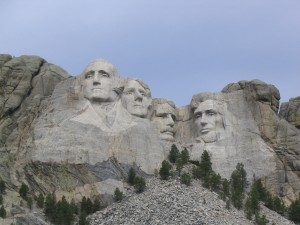 ce of strength,” said David McCullough, author of the Pulitzer Prize-winning biography John Adams, “It sets higher standards for all of us.”

What do you see at the beginning of any journey? Sad to say, but many people see only the long daunting road ahead of them. Most will trudge on, but they’ve already sealed their psychological fate. They may make it past the first few bumps in the road, buteventually they’ll come up to an obstacle. They will conclude it represents an immovable object.

And their journey will end, their investment lost.

Then they’ll embark upon another journey and face the same fate. Over and over this happens, until, at the end of their life, they’ll surmise “life is hard.” They’ll leave this world no different than what they found when they arrived.

It doesn’t have to end this way because each journey doesn’t have to begin this way. Again, we have our culture to thank for this. It is the American Spirit – the Spirit of 1776 – that runs in our veins and in the blood of any independently minded soul, regardless of national origin.

We often think of this merely in terms of freedom and liberty. The Founding Fathers, however, gave us something much more important than individual rights. They gave us personal responsibilities.

The story goes that upon the conclusion of the Constitutional Convention, a woman happened upon Ben Franklin and asked him, “Well, Doctor, what have we got? A republic or a monarchy?”  Franklin, by now 81 years old, hadn’t lost his wit. He tersely replied, “A republic, if you can keep it.”

“We the People of the United States, in Order to form a more perfect Union, establish Justice, insure domestic Tranquility, provide for the common defense, promote the general Welfare, and secure the Blessings of Liberty to ourselves and our Posterity, do ordain and establish this Constitution for the United States of America.”

Here’s what sets the Colonists apart from the British Barons who forced King John to sign the Magna Carta. In the British case, the Barons sought permission from the King. In the American example, the Constitution assumes all rights naturally accrue to the individual. So, whereas in the Magna Carta, the government (i.e., the King) recognized and gave rights to the people, in the Constitution of the United States the people recognized and gave rights to the government.

This juxtaposition of rights stands out as the definition of the American Experiment. Up until then, not since Athens (and that was a FAIL) had anyone ever figured individuals could have this power. Everyone assumed only some higher authority (a King, a Caesar, etc…) could merit such power.

But lately this American Spirit has wavered. Over the last few generations, we’ve lost the drive that has us accept the responsibility to “change the course of mighty rivers, bend steel in our bare hands, and, disguised as our mild-mannered selves, fight a never-ending battle for truth, justice, and the American Way!”

No, instead we’ve fallen prey to the wiles of poetry. For example, during World War II, the Federal Council of Churches included this Serenity Prayer in its book for army chaplains and servicemen:

Fortunately, when the “Greatest Generation” (though close, it’s still a misnomer, since America’s Greatest Generation remains its first generation) confronted those cliffs on the beaches of Normandy, and as their comrades fell by the thousands beside them, they refused to “accept the things they cannot change.”

If you look at the reality of the evolution of mankind, you will find more and more immovable barriers falling. There used to be a sound barrier. Not anymore. Putting a man on the moon used to be a science fiction fantasy. Not anymore. They once thought it impossible to map the human genome. Not anymore.

One of the saddest things I’ve ever seen is an adult tell a wide-eyed youth, “It can’t be done.” Contrast this to the advice of my high school physics teacher, who said, “I’m not going to tell any of you kids you can’t invent an anti-gravity machine because it’ll never get invented if you think you can’t invent it.”

Now go back to those obstacles in the road we opened with. There’s really only one thing standing between where you are today and where you want to be tomorrow. It’s you. Do you really want to capture your full potential to accomplish any task? If you do – and not everyone is willing to – you must immediately accept the sole responsibility to get it done.

If you want it bad enough, you can do anything, no matter what anybody says.

Well, it’s just about time. I need to show you one final thing. I need to show you some popular self-improvement methods as a starting point. Hopefully, this will only be review for you. Still, it’s important to remember these other processes so you can see where the Lifetime Dream Process is different.

Only by discovering this difference can you maximize the benefit of the Lifetime Dream Process.

« How to Declare Independence and Start Pursuing Your Happiness » Do Self-Assessments Really Work?