The Secret to Getting Anything You Want

It’s amazingly easy it is to get everything you want out of life. It only requires you know one thing. Unfortunately, man has been aching to discover this one thing for centuries. Surprisingly, thanks to the experiences of others, searching for this 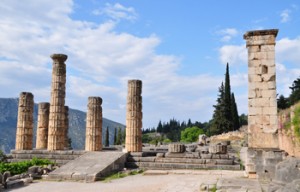 one thing has never been easier.

Once again we return to Ancient Greece to find the secret to getting anything. It stands (or should I say, “once stood”) at the Temple of Apollo at Delphi. It is from this perch Greeks (and later Romans), would come listen to some old priestess lady who delivered sound advice like – and I paraphrase – “300 Spartans against, like, a million Persians? C’mon! What did you expect?!” (q.v., Thermopylae), “You stink, now go home and die!” (to Nero) and “Socrates? The one who keeps saying he knows nothing? Yeah, that probably makes him the wisest guy in all of Athens.”

But the secret didn’t come from the mouth of the Oracle. It was etched in stone on the very Temple itself. Indeed – and again I paraphrase – when told the compliment bestowed upon him by the Oracle, Socrates, after vehemently denying he was the wisest in all of Athens, basically said all he ever learned he learned by reading this one phrase inscribed in the forecourt of the Temple.

And it is this same phrase which reveals the secret to getting anything you want: “Know Thyself.”

We don’t know who carved it or who originally said it, but Socrates sure did take a shine to it. At least according to Plato, a student of Socrates and one of the main sources of all we know about Socrates, only because this wise guy refused to put anything to parchment. (Socrates was old school – literally. He was opposed to the written word because he thought it might cause people to forget. Remember, at that time all learning was passed down orally.) In no less than six of Plato’s dialogues can we find Socrates yapping about “know thyself.”

It’s in Plato’s Phaedrus and Philebus, though, that we see the classic Socratic reason to “know thyself.” In the former, Socrates says, “I am not yet able, as the Delphic inscription has it, to know myself; so it seems to me ridiculous, when I do not yet know that, to investigate irrelevant things.”

Socrates here refers to other intellectual pursuits. He says it’s a waste of time to try to understand anything else if you first don’t try to understand yourself. If you think about this, it makes sense. We describe all things – our thoughts, our beliefs, what we had for dinner the night before last – in terms of our own experiences. If we don’t have a good handle on those experiences, we’ll have a difficult time translating our thoughts in terms of experiences others can understand. So, before anything else, “know thyself.”

If your life’s journey is to take you anywhere you want, you must first “know thyself” before you even commit to a single step. If you really, deep down, know yourself, you’ll know how to get almost anything you want. You’ll know how to capitalize on your strengths and how to overcome your weaknesses. You’ll know what goals to focus on and what tasks are nothing more than timewasters. You’ll become a lean mean Lifetime Dream Achieving machine. It only requires one thing: you must “know thyself.”

Like Ben Franklin, you might think this is pretty hard to do. Franklin once quipped in his Poor Richard’s Almanack “There are three things extremely hard: steel, a diamond, and to know one’s self.”

If it was so difficult for such wise guys like Socrates and Ben Franklin, how can someone like you “know thyself”? Luckily for you, today it’s a whole lot easier to “know thyself.” All you need is a little discipline, a little honesty and a little help from a familiar ancient friend.

Oh! There he is right now on the next page.

« History’s Greatest Quest » “Why is This Important to You?”