“What Success Means to Me”

*My grandfather, an immigrant 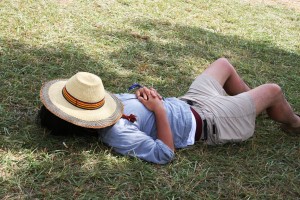 from Sicily, always laughed when he (repeatedly) told this story to me. If it sounds familiar it’s because this Parable has been told in many different ways by many different ethnic groups. See Appendix A for the original story.

One morning, a Fortune 100 CEO, vacationing in a lush Sicilian villa overlooking the warm Mediterranean sands, came upon a local peasant sleeping comfortably under a fig tree. The peasant’s children danced around him, only occasionally tugging at the straw hat that protected his relaxed face from the tropical sun. The energetic CEO studied the placid scene. Curiosity getting the better of him, the CEO woke the native and asked him what he did for a living. “I’m a fisherman,” yawned the perplexed peasant. The CEO then asked the man why he wasn’t fishing. “I’ve caught enough fish for today,” replied the tranquil fisherman. He didn’t seem to mind the CEO interrupting his quiet family life. “I am the best fisherman on all the seas,” he continued matter-of-factly. “Each morning I take 30 minutes out of my day and haul in a boat-load of fish. This is enough to feed my very large family and still have some left over to share with my less fortunate neighbors. I can then spend the rest of the day watching my children grow or whatever else I want to do.”

The CEO thought for a moment. “Kind sir,” he finally began, “Forbes Magazine recently ran a cover story about my uncanny ability to spot a good business in its infancy. What would you say if I became your partner?”

“Why do I need a partner?” asked the puzzled fisherman. “Besides, even if you could fish, I already have all the fish I could ever need.”

“Well,” the CEO began his pitch, “I may not know how to fish, but I have a Harvard MBA. I could use that training to draw up and implement a successful business plan.”

“Why do I need a business plan?” queried the fisherman. “I already know how to fish.”

“What do I need money for? I already have enough fish to trade for whatever I want,” responded the fisherman.

“Sure, but you’ll need to hire more fisherman to work under you,” continued the CEO.

“Why your time is too valuable for you to do the actual legwork. You can leverage your knowledge by teaching others your secret. The more workers you teach, the higher the yield of fish our company will catch. The more fish we catch, the more we sell. The more we sell, the more profits we make…” spun the CEO, now clearly in a groove.

“Then what?” wondered the more curious fisherman.

“Then we can hire an investment banker,” the CEO said without missing a beat.

“And then?” the fisherman egged him on.

“And then,” the CEO proclaimed, putting the icing on the cake, “And then we make a killing in our IPO! We’ll be rich!”

“And then?” the fisherman concluded.

The CEO sighed. “Well,” he strained to explain, “If you’re rich, then you can buy a house on the beach, sleep in the morning, play with your children and do whatever you want!”

The CEO heard only the silent rush of the soft Mediterranean waves against the shore.

The Sicilian fisherman had already fell back to a comfortable sleep against the fig tree, his children dancing around him, only occasionally tugging at the straw hat that protected his relaxed face from the tropical sun.

Are you often misled into taking another person’s definition of success as your own? Do you now see how easy it is to fall for this trap? Slow down for a moment and consider how many times you’ve fallen victim to this alluring trick.

You can rest easy. The ruse has been exposed. Be confident you’ll never succumb to that foolish stunt again.

In the next two chapters, we reveal both the fundamental mistake of the Harvard MBA and the ultimate secret of the Sicilian fisherman.

« To People Who Have A Dream – But Can’t Get Started » Who Wants to Be a Millionaire?