Banzai!” shouted Joey as he thrust headfirst straight down the side of the mountain.

“Banzai!” yelled Ricky shooting through the narrow gap amid eerie outcroppings of ragged rock before gliding into a white abyss of sheer ice. His monoski barely touched the gritty, granular snow that provided the only hope for breaking his fall.

“Banzai!” echoed Ken, a tequila-primed fireplug of non-stop energy and exuberance, following his comrades off the 11,000-foot peak at nearly ninety miles an hour. 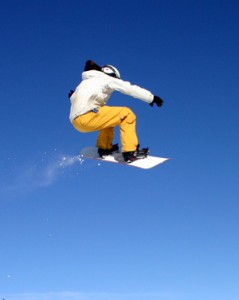 I cringe now as I remember my first-ever ski trip – a four-day bachelor party at Mammoth Mountain on the eastern fringe of the Sierra Nevada’s. I especially wince when I recall how I got down from the top of the mountain – sliding on my backside down a double diamond run when no one looked.

Travelling back to L.A. with my cousin Ricky after skiing, he mentioned how similar we were.

Of course, I would never risk life and limb skiing down a monstrous mountain at a speed fast enough to qualify for the Indy 500. Not me. I’m too mature to do that or any of the other wild death-defying stunts my California cousin and his colleagues might partake of. Hang gliders? Forget it! Low level parachute jumps? No way. I perceived my stature as much more elevated than these irresponsible boys.

Boys. I actually called these older men “boys.”  I reflected. In a different time and a different place, these young adults might have been glorified as idols. They exhibit the kind of moxie that permits a man to pilot a plane through point-blank antiaircraft gunfire on a tree-skirting bombing run. I could hear the chisel-chinned actor proclaiming in the generic World War II movie, “Someone’s got to do it if we want to stop Hitler!”

Someone’s got to do it, but never me, I groaned internally. Banzai! – the act of living on the edge, fully comfortable fate persists as the ultimate arbiter, and we act as mere players in a never ending game. Tempting fate requires an inner confidence few display. Flying without instruments in a dense fog seems downright stupid, but a hero would do it to deliver the rare serum needed to save a sickly child.

Of course, no heroic objective derives from frivolous thrill-seeking, but unadorned daring adventures like these do make good practice. For all we know, blind mindlessness – the spirit of Banzai! – probably clears your arteries. It’s got to have some good if it’s so bad.

I looked at my cousin as he drove us home through the high desert, his eyes glued to the freeway. I respected him in a manner I had not yet learned to respect myself. I exhaled deeply, lamenting my lack of fortitude.

“Oh, look,” Ricky interrupted my resigned self-pity, “there’s the cinder cone volcano we passed by on the way up. You remember. The one you called ‘a big brown pimple rising from the rest stop.’ The one you said you always wanted to climb.”

I snapped out of my daze and bluntly ordered, “We’ve got an hour of good daylight. Pull over.”

« Mea Culpa » Your Date with Destiny